Visit the Advantech Global website, or choose your country or region below.

Imagine a network based on inexpensive, high volume chipsets, with data rates up to 12Mbps, distance, designed from the start with plug-and-play in mind. Add 5 Volt power, with up to 500mA current capacity, and compatibility with many consumer products.

What we just described is “Universal Serial Bus” (USB) — an external connectivity communications technology for linking peripherals such as mice, keyboards, modems, joysticks, video and more to Macintosh and PC computers. It has gained favor commercially and privately since its development in 1994.

Today, it is a standard feature on most all new PCs as it quickly replaces PC serial ports. This has been driven by some of the largest electronics manufacturers. It was inevitable that USB would also become a factor in the retail, data collection industrial worlds.

Where USB Came From

USB grew from the requirement for a simple, inexpensive expansion bus for PCs. PCI solved many speed and compatibility problems that existed with the ISA bus. But, the need to take the cover off the PC to add a peripheral was a hassle. And, though PCI made Windows plug-n-play possible, we have all experienced the frequent reality of “plug-n-pray” instead.

USB is serial (less costly than parallel) and allows you to “hot-swap” without rebooting the PC. In USB, the PC is the master of the network and controls all bus traffic. Peripherals are simpler and less costly.

A USB master does not have to be a PC, but usually is. Today, all versions of Windows and Linux support USB. An embedded device is a computer that does not look like a computer. Only sophisticated embedded devices with full operating systems will be USB masters.

“Can I add USB to a computer that does not have a USB port?”

Today, all new PCs come with USB ports. But other, especially older, computers may not have them.

You can add USB by installing a PCI add-in card. You may need to upgrade the computer’s O/S and BIOS for it to work. Are you running out of PCI or ISA slots? With USB you can forget about setting COM ports and IRQ’s – just plug in a USB to RS-232, RS-422, RS-485 or parallel converter. 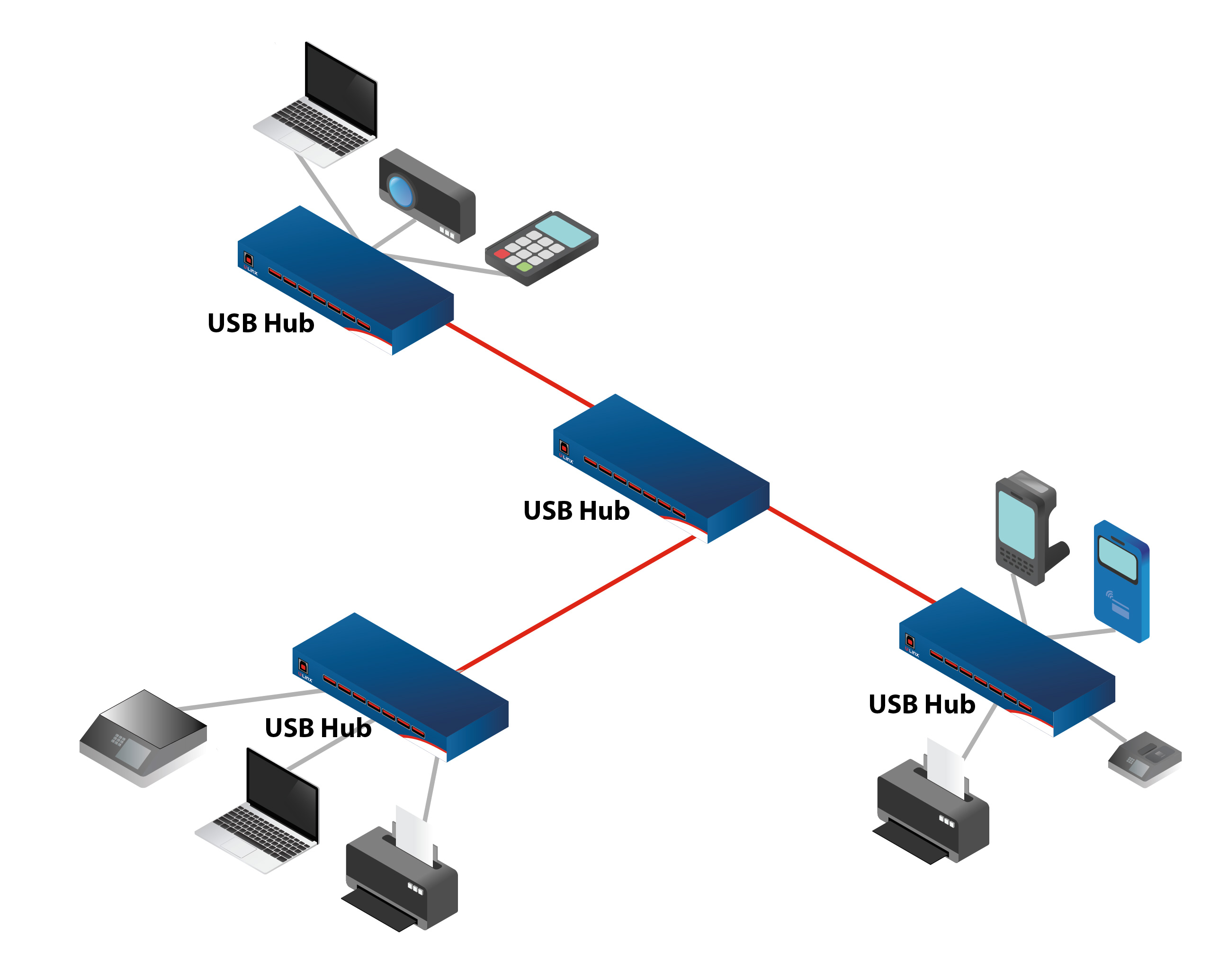 USB uses a “star” topology, meaning there is only one device connected at each end of a cable; multiple devices require a hub to re-distribute the signal.

A single USB port can connect up to 127 peripheral devices.

Plug-and-Play – USB supports Microsoft’s plug-and-play (PnP) specification as well as hot-swapping or hot-plugging (i.e., you can unplug something and plug in something else on the fly, without shutting down the computer).

It is auto-configuring – the peripheral device and computer figure out how to communicate without disrupting anything else.

It is a “cross-platform” standard – it will work on either a Macintosh or PC.

It can support up to 500mA of current to items on the bus.

USB devices have at least one interface, which is the peripheral’s physical component.

Each interface has a set of endpoints, which are data producers or consumers. All USB devices have a special endpoint called “endpoint 0” that supports generic USB status and configuration protocol.

Version 2.0 is backward compatible with USB 1.1 and also retains the plug-and-play and hot-swapping capabilities of 1.1. OTG, a supplement to USB 2.0, allows mobile-device interconnectivity when a PC/laptop is not available.

Important to note is that, while each version of USB is compatible with its predecessors, it cannot make earlier version devices go any faster.

Baud Rate: 1.5 Mbps and 12 Mbps can co-exist on the same bus. However, mixing speeds should be avoided as it substantially slows communication. It is best to split the devices between two host connections. Note that 1.5 Mbps wiring does not require shielding.

Wiring: Cascading or star topology options; multiple devices supported by extending with multi-port hubs. Cables have a two-conductor, twisted-shielded pair of wires for data, plus two heavier wires for 5V power and ground.

Common Hardware: USB hubs expand networks to accommodate up to 127 devices. ISA and PCI cards for USB are popular and adapters are also available for converting serial, parallel and Ethernet ports to USB.